Ready for something remarkable? 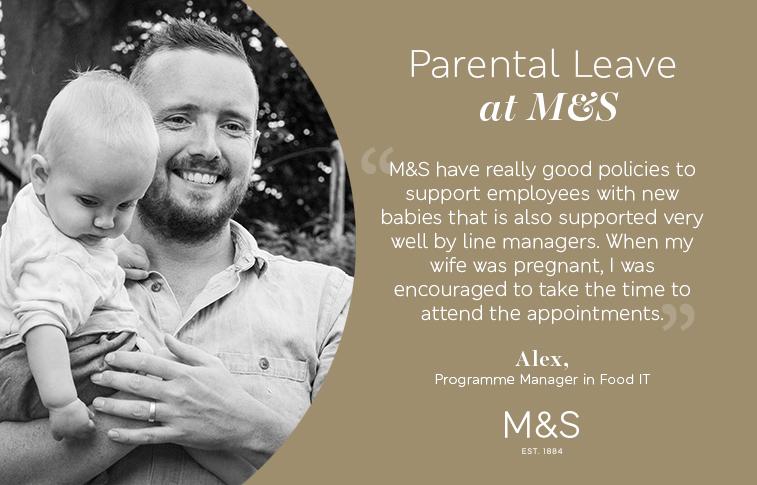 Meet Alex, one of our Programme Managers in Food IT. One of his favourite things about working at M&S is our People Policy. This was a major benefit when he and his wife were expecting their first child. He was working in central London, but their home was in Essex. As he explains: “when the due date got nearer, I was really concerned that my wife would go into labour and I’d be at least 80 miles away.”

Luckily, he already knew we offer a number of policies that aim to make life easier for both parents and expectant parents. On our intranet, M&S World, he had found details of our maternity and paternity leave policies and throughout the pregnancy, his line manager had also been very supportive. “I was encouraged to take the time to attend all the appointments, with no pressure of being at work,” he says.

Sharon, Alex’s line manager, said she is constantly working towards getting a better balance of diversity at work in M&S, so when Alex approached her about the opportunity of shared parental leave – she thought it was a great idea. “I talk to lots of women coming back from maternity leave and know how much of a challenge that can be and so to be able to support the move to making it okay to share parental leave is great - hopefully this will encourage more people to take the opportunity,” she says.

Leading up to his son’s birth, we enabled Alex to work from home. “That was a massive relief and took a lot of stress out of the situation,” he admits. It was easy to keep in touch with his line manager by text and this helped when he returned to work after his son was born – it only took a brief meeting with his manager to bring him back up to speed.

Since then, Alex has also benefited from our flexible working policies, which enables him to work where he needs to be. This has given Alex a much improved work life balance and he admits it also had an unexpected effect on his work. “My productivity has actually gone through the roof,” he says. “I get so much more done, because I’m not spending 15 hours a week going into an office to sit at a desk. I get to see my son in the morning and put him to bed at night.”

Towards the end of his wife’s maternity leave, Alex also decided he wanted to take a month’s shared parental leave. He found that his boss was very supportive, so this was quickly agreed and approved. It has allowed him and his wife to plan the trip of a lifetime to Australia – along with their son, of course.

Similar roles for you

View All of Our Available Opportunities
Return to M&S Blog

Our amazing colleagues span many walks of life - all with some brilliant stories to tell. Here are just some we think you’ll want to look at.

M&S Tech is shaping up to be a space that's often responsible for the next big thing in retail - but we still need you. Great discoveries happen when a diverse group of people come together. Upgrade to M&OS.